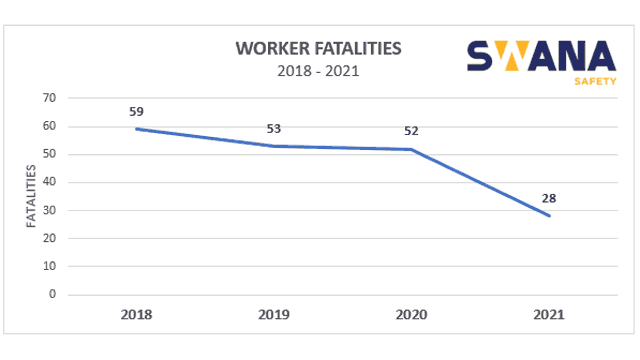 Silver Spring, MD – The Solid Waste Association of North America (SWANA) reported a significant reduction in solid waste worker deaths in 2021 in the United States and Canada. Industry fatalities fell by nearly 50 percent and continued a downward trend since 2018. The accelerated reduction in worker fatalities was first noted by SWANA in June 2021.

“We are very pleased to report this good news on safety to the industry,” stated David Biderman, SWANA CEO and Executive Director. “There likely are several contributing factors to the remarkable improvement last year, and I suspect the increased focus on health and safety relating to COVID-19 was one of them,” Biderman added.

SWANA will be contacting private and public sector members in coming weeks to determine whether there were similar improvements in other safety metrics in 2021.

For Canada specifically, SWANA did not record any worker fatalities in 2021, compared to three in 2020 and four in 2019.

Worker fatalities continue to follow similar trends over the past three years, with increases in March followed by a decrease into May. There is then a large jump in June and a gradual decline during the second half of the year. This information could help companies and local governments determine when safety training might be most effective.

In addition to worker fatalities, SWANA also tracks events in which a member of the public is killed in a solid waste related incident. Unfortunately, as has been widely reported, there was an increase in the overall number of vehicle-related fatalities in 2021, and the solid waste industry was not immune from this trend.

In nearly a third of these incidents, the driver of the other vehicle crossed the center line and struck a waste vehicle or ran into a waste vehicle while stopped. This suggests that distraction continues to be a contributor to a considerable number of 3rd party fatalities.

SWANA will work to continue the reduction in worker fatalities and to reverse the trend in 3rd party fatalities through continued industry engagement. SWANA’s robust safety programming, including the Chapter Safety Ambassadors, weekly Safety Matters tip sheets for members, and annual Safety Summit at WASTECON®, provide ongoing resources for public and private solid waste operations of all sizes throughout the United States and Canada. SWANA appreciates the support of the companies whose sponsorships help provide these safety initiatives, which is contributing to the industry’s improving safety performance.