From Cakes to Robots, Icing to Steel 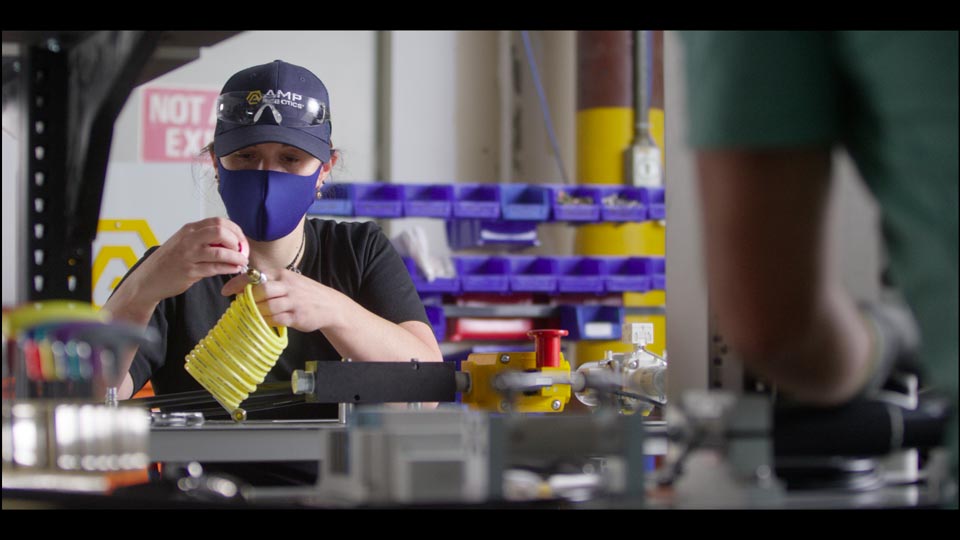 In January 2019, my husband, Ben, started a job as a robot operations engineer at a relatively new company called AMP Robotics in Louisville, Colorado, about 25 miles from our home in the Denver metro area. AMP makes robotics systems enabled by artificial intelligence to automate the identification and sorting of recyclable materials. The company was growing quickly to meet demand, and Ben was part of a team responsible for assembling units to get them ready to ship to customers. The quick pace of things didn’t bother him; he enjoyed the work. Our son, Luke, and I would drive up to meet him when he was able to break for dinner; then he’d put in a few more hours before finishing for the day. I was a cake decorator at a local Target bakery at the time, and my early-morning shifts complemented his long days; I could be around to handle caregiving and household responsibilities when he was not.

A few months into his role at AMP, Ben asked if I was interested in helping lending a hand. The team was slammed, and, he joked, “You know how to use a screwdriver!” After more conversation, it was clear he was serious, and I figured I could. So, I drove down to the manufacturing facility and met with the tiny, yet able, crew. I followed them like a shadow as I met others on the team, got a quick lay of the land, and strapped on a tool belt (I always carry my multitool, but, like JAWS, I was going to need a bigger belt). I was given the assignment of wiring junction boxes; I did my best to take instructions while looking at frames I’d never seen before and suppressing my concern about doing something wrong. But everyone I interacted with was friendly and helpful, and I really felt I was contributing. I stayed for six hours that first day and helped to the best of my ability, kissed Ben goodbye, and went home.

Ben told me the team was impressed with me and might offer me a full-time job. I didn’t think much of it at the time, as I had returned to my buttercream and icing pouches. I certainly didn’t realize that my time on the floor at AMP had functioned as an interview until a job offer showed up in my inbox a week or so later.

At first, I was confused. It was one thing to learn the ropes to get by for a few days in a totally new environment; it was another to think about it as a career. I loved cake decorating and the challenge of bringing to life the different creations children or their parents envisioned based on a photo or lively description. But working in a retail bakery was not a flexible gig. Luke was a cancer survivor, and being his caretaker involved shuttling him to and from the emergency room and between medical appointments. Working full time and struggling to meet the demands of a rigid schedule was stressful, to say the least.

But cake decorating certainly hadn’t been a predictable path. I’d cross-trained in a number of departments at Target, and this was the one that stuck—I grew both in my skills and enjoyment of the job over time. I’ve always been drawn to opportunities that allow me to learn, and I guess that’s what led me to say “yes” to the unexpected opportunity to transition to the assembly floor.

My first day as a full-time assembly technician was in May 2019. While it wasn’t a completely fresh start given my unofficial training, I still had plenty to learn. My new coworkers were patient, helpful, and understanding, and every day I gained a little more knowledge and experience, and with it, confidence. I’ve had so many wonderful mentors and teachers at AMP.

We’ve progressed from assembling a single cell at a time to production on up to five different projects on the floor at once. Given how rapidly AMP has grown, I’m one of the veterans now, and I help train new team members we bring on. It’s hard to fathom not knowing the difference between a socket and a hex head a year and a half ago. But the key was not being afraid to ask questions, and keeping at it.

Equally key to my sense of contentment and fit at AMP was the outpouring of support I received after Ben’s sudden passing. Simply put, it’s a period I wouldn’t have gotten through without the people at AMP. They had my back like family. It wasn’t just that the original team knew him. The company was more than understanding, giving me the time and space I needed to make arrangements, grieve, and feel ready to come back to work. It was this experience as much as the opportunity to learn, the challenge of the work, and the belief that what we’re doing is creating a cleaner, better world, that solidified I’m in the right place. 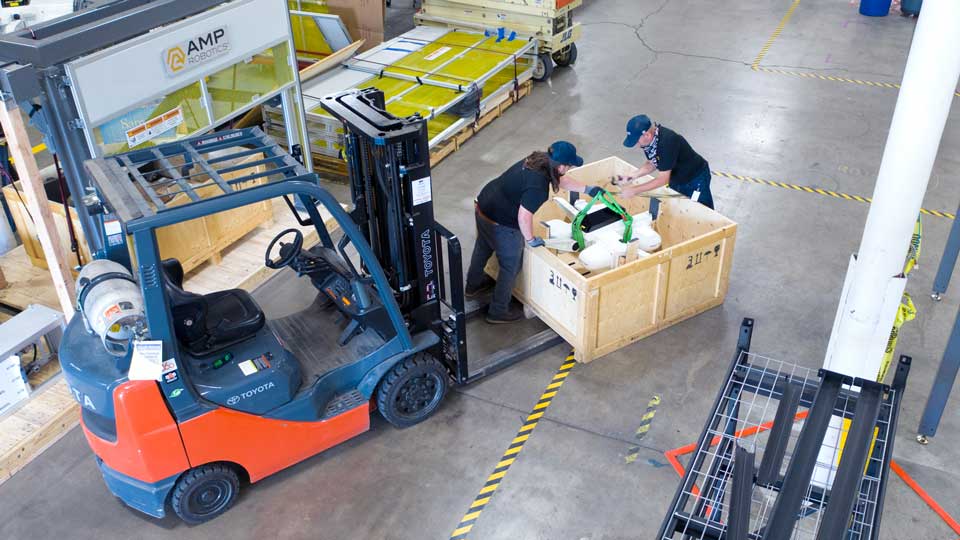 I’ve been asked if I’d like to see more women in roles like mine. Sure! But not just for the sake of representation. What I consider much more important, not just in waste management and recycling, but in any industry—is extending opportunities to those who don’t fit traditional molds, yet are curious, eager to learn, and willing to work hard. Your degree and the school on your resume—or lack thereof—or the career path that brought you to today shouldn’t be limiting factors. That’s how we’ll broaden the applicant pool and encourage more diversity organically. I may be the only woman on my assembly team, but I’m quite detail-oriented. I didn’t come in with a strong hardware and assembly line mentality, but I have a handle on the training program now, and I like showing new hires the ropes. Any tool I or a member of my team might need is slung around my waist (or, as my team calls it, the “bat-belt”), and I’m happy to lend them out. I string the cables, but I’ll let a teammate wire the air hoses. It’s this recognition that perhaps you’re not as strong as everyone in every area, but what each of us bring to the table is valuable. This is why we build teams. We complement each other like pieces to a jigsaw puzzle, and we make sure to have some fun along the way.

I may not have had to formally apply to find my niche. But, put yourself out there! Or, if you’re already where you want to be, refer someone in your network to a role they’re qualified for but may not pursue. We hired a systems and network administrator last year who I referred. And companies and hiring managers: be open to unconventional backgrounds or other demonstrations of interest and fit. We all deserve a shot at a gig where we feel challenged, fulfilled, and excited about the future. I love my job and the people I work with, and I wouldn’t want to be anywhere else. 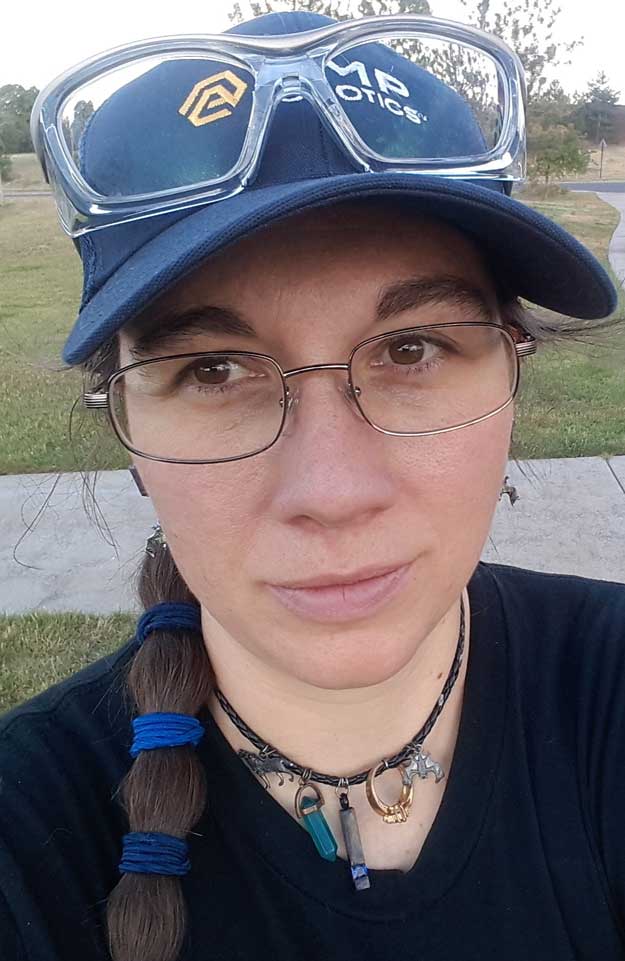 Maria Van Dyke is production team lead at AMP Robotics, responsible for guiding team builds, reviewing production documentation, ensuring adequate supply of materials for assembly, and more. She joined the company in May 2019 as an assembly tech and has worn many hats in the growing company, from wiring to shipping spare parts. Maria is a Colorado native and enjoys cycling, video games, movies, and spending time with her son.